We recently had a great opportunity to head over to Cumberland Island and walk around some of the older Carnegie mansions. There is a couple of ways of getting over to Cumberland Island. The way most people go is by car to St. Mary’s, Georgia, and then by National Parks Service ferry over to the island. The Parks Service has the franchise for passenger service to the island and is the only authorized pay-for-service to the island. The only other way to go to the island is if you have a friend with a boat. Private boaters can go over and tie up at the docks without getting fined.

We left Fernandina Beach marina and headed north to Cumberland Island. We cruised up Beach Creek through the marsh grasses. The tide was running out so we had to be careful and not get stranded but we did make it far enough up the creek to see oyster beds and several water birds. We could also see the tops of the Dungeness chimneys through the trees. 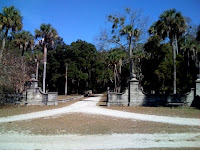 After leaving the creek we cruised up to the dock, tied up and started walking. We took a quick look at the Ice House Museum and then walked to the ruins. Dungeness used to be one of the Carnegie’s great houses. It sat on a grassy slope high enough to command a view of the incioming ships in the river. The house was burned back in 1959 over a poaching dispute and all that remains are the stone walls and chimneys. The Parks Service is stabilizing the ruins to prevent further damage and have it fenced off so you can’t actually wander through the 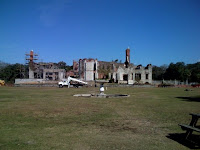 house. The grounds are pretty impressive and it is easy to imagine ladies in long skirts and men in white linen playing croquet. 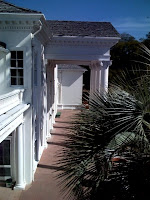 After wandering around for a while we got back in the boat and headed north. We went past the King’s Bay Naval Submarine Base and entered one of the many creeks that go through the salt marsh on the west side of Cumberland Island. We docked at Plum Orchard and got out of the boat for another wander around. Plum Orchard is a magnificent house that was built as a wedding present by Mrs. Carnegie for one of her children. The Parks Service is restoring the building and is doing a great job. 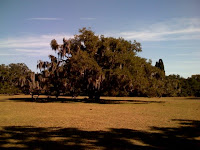 There was nobody around and the door was open so we went inside. Most of the furniture has been removed but the hardwood trim and floors are all in great shape. We went through the ground floor living rooms, entry foyer, the gun room and the parlor and then headed up one of the grand staircases to the upper floor. The bedrooms were still being restored but some of the previous grandeur could easily be imagined. Indoor plumbing too!
Then it was back downstairs and into the basement. As an engineer, I always think the 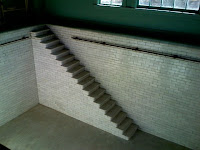 basements are interesting. Thats where the mechanical systems are and where the structure is the most interesting and most often exposed to view. The elecrical panels, complete with big Frankenstein-type switches, were all restored and polished. The elevator turned out to be steam powered. After a few ups and downs, some dark corridors and creaking doors we made it to the recreational end of the building where the pool and the squash court are. The indoor pool is quite something with no shallow end for the Carnegies, just a metal pipe around the pool to hang onto when you get tired of swimming.
After roaming the grounds for a bit we were back on the boat and heading home. Along the way we saw dolphins fishing along the shallow shoreline. The dolphins were working in pairs herding fish into the shallows where they were easy to catch and eat. All we could see was a flurry of fins and tails as the dolphins fed.
Shortly afterwar that sighting we were back in Fernandina Beach, wind blown and sun burnt but having thoroughly enjoyed the boat trip. Off to the Palace Saloon to re-hydrate!

Posted in: Cumberland Island, Things To Do