The town of Fernadina Beach is full of pirates. There are carved pirates, The Fernandina Fighting Pirates play football at the high school, there is a pirate painted on the water tower and there are even pirates wandering around downtown.
My introduction to the town’s pirates came on Martin Luther King Jr. Day last January. There was a parade in town and, as all parades do, they came right down Ash Street in front of the inn. We had just re-opened the inn the week before and were still pretty new to the town. Being from Canada I had never seen a Martin Luther King Day parade so I took a break and sat on our front porch in one of the rockers and watched the parade go by. The parade started with police cars, FPL line trucks, fire trucks and went on with local service and church groups, marching bands and civic leaders. It was quite an impressive display but all through the parade I kept hearing 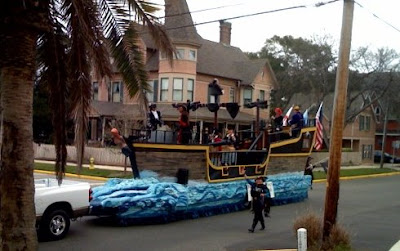 this booming noise, getting louder as the parade went by, like fireworks going off. Right at the very end of the parade came the source of the noise; The Fernandina Pirates Club, complete with a ship-shaped float and cannon. They were firing off the cannon as fast as they could reload. I still haven’t figured out the MLK – Pirate connection but I guess every parade needs a few pirates.

The Pirates Club even does a Pirate-For-Hire service with the proceeds going to charity. Need a pirate for a wedding or birthday party? Want someone kidnapped? Even on days when there is nothing going on you’ll see pirates wandering around downtown posing for pictures with the tourists or drinking in the Palace Saloon. There’s something to keep in mind for all of you couples that are calling about the Elopement Special… How about a rented pirate best man and maid of honor? Aaarr.

The pirate on the left is probably the most photographed pirate on the island. He stands guard outside the Palace Saloon. Maggie Doone likes going to the Palace because Artie “The One Man Party” and daytime bartender keeps treats behind the bar for her but it took her several visits to get used to the pirate at the front door. Now she walks right past him as if he isn’t even there.

More on the Palace and some other island watering holes in a future edition on this blog. Meanwhile… Arrr me hearties, time to shove off!

Posted in: Palace Saloon, Pirates, Things To Do