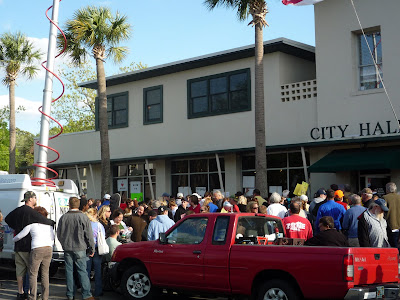 A few hundred citizens of Fernandina Beach showed up at City Hall this evening for the meeting that was to decide Felix’s fate here in the city. My previous blog posting has some of the background on this story. The City was attempting to stop Felix from riding his tricycle through the city as he sold cookies, peanuts and newspapers.

The day started out in a very festive mood and it hasn’t slowed down. Felix was riding his trike through town and his trike was all decorated with balloons and streamers. The Green Turtle had a Felix Fest before the Council meeting with Felix playing his harmonica with the band. Then came the council Meeting.

The crowd couldn’t all fit into the council chamber and so we gathered on the sidewalk outside. The TV news van was there, chidren were holding up signs in support of Felix and the crowd was ready for some good news. The Council moved Felix to the front of the evening’s agenda. There were a few words from Felix’s lawyers that described the life of Felix. They talked about his childhood, his work at WalMart for 17 years and most importantly, his work as an ambassador of Fernandina Beach. Felix’s mom was up next and she talked about how Felix loved what he does and how Felix calls it “fellowshipping”, not peddling. And that’s when I learned something new about Felix. All of the money he takes in gets donated to charity. I thought he was using the money to live off of but he funds scholarships for underprivileged children.

Felix isn’t much of a talker and was asked to say a few words. Instead of talking he played his harmonica, first with “Let Freedom Ring” followed by a great blues riff. The crowd went wild!

The City Lawyer was up next and the matter was resolved quite quickly. Because Felix donates all of his sales it is not considered “selling”. Instead he is taking “donations” because it all goes to charities. It turns out that the city ordinances that regulate peddling don’t even apply to Felix. The crowd went wild again!

I love living in this town. Where else but in small-town America does a community come together to support one of their own? The community support for Felix is incredible and it turns out he is supporting some of the community through his charitable donations. Felix’s Mom made a great comment during the Council session. She asked that if Felix can fund scholarships for underprivileged kids then why can’t everyone else in the crowd do something as well. That is a very good question. We’ll all have to come up with an answer to that one.

Posted in: Our Neighborhood