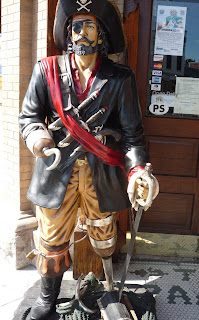 Arrr! It is that time of year again, me hearties! Talk Like A Pirate Day, my favorite holiday, is rapidly approaching. Every year on September 19th people all over the world add a little swagger to their step and a little more whimsy to their wordage.

The Fernandina Beach Pirates Club has just announced that they will be out in full force on the 19th. The club has promised that it’s members will be in the streets, in the alleys and in the shops to help people with the Treasure Hunt that they have put together. The Pirates Club is a fun bunch. They are in every parade, they take over the town during Shrimp Festival and you can usually see one or two of them down at the Palace Saloon on any given Saturday.

You don’t know how to talk like a pirate? Lucky for you there is lots of good free advice on the world wide internets. You can check out the official Talk Like a Pirate Day website for a start. If that doesn’t help there is a video on YouTube that goes over the all-important 5 “A”s of talking like a pirate; Ahoy, Avast, Aye, Aye Aye and Arrr.

Maggie Doone, although not a member of the Fernandina Beach Pirates Club, will be dressed for the occassion in full pirate regalia. Watch for her new video “Maggie Doone Talks Like a Pirate”. Arrrr-oooo!